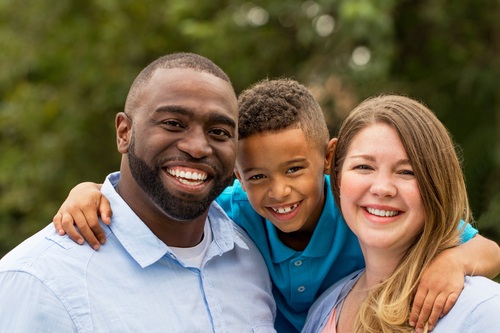 Before I share my remarks, I want to make a few important disclaimers as follows:

1. I am only sharing my own personal perspective as the child of a multi-cultural marriage.
2. Although my own parent’s marriage didn’t work out, many other multi- cultural marriages are very happy and healthy.
3. There’s no way that I could be prejudice of another race or culture, when I too, am a minority. I have always felt that every ethnicity and culture has beautiful people, and I tried my hardest to date as many of their beautiful women as I could when I was still a single man!

Now that we’ve got that out of the way, here’s my personal take on “multi-cultural” marriages. Notice that I didn’t say “multi-racial marriage” but rather “multi-cultural marriage,” and I will explain what I consider to be the drastic difference between the two descriptions herein.

My father is full Chinese, born in Mainland China; and my mother is German and Irish, born in Upstate New York. My parents made for an unlikely marriage couple back in the 1960’s when multicultural relationships were not as common as they are today. My father was the charismatic, handsome, and high achieving academic that had graduated from the top University of Taiwan and had then come to the United States in order to pursue his PhD. My mother was quiet and shy, but very beautiful, who was raised in a blue collar industrial town, and she was the first person in her family to go to college.

Separately to this day my parents are very good individuals who love me and I love them. But in my opinion, their marriage was fraught with constant conflict, in part I believe, because of how drastically different the cultures were that they were raised in. My mother once told me a story of how she told my father that she would love me not matter what, even if I grew up to become a garbage truck driver. Let me now say that there is nothing wrong with having an honorable job that pays the bills and provides for a family, regardless of what type of work it is. But with that being said, if you understand the Chinese culture, you will know that my mother just gave my father the ultimate insult. My mother meant to say that she was going to love her children unconditionally, regardless of their choices that they made in their lives. That is the type of love that my mother had for me when I was a young children, and to this day she still loves me with than same simple and pure way now that I am an adult. My mom never put any academic expectations on me. As I said, if I wanted to be a President of the United States, great! If I wanted to be a garbage truck driver, that’s great, too!

My father on the other hand, grew up in a very strict household where academic achievement and honor to the family were top priorities. After my parents divorced, the court gave my father custody of me every summer until I graduated from High School. One of the first things my dad would ask for was my report card. If he saw that I got a B or a C he would yell at me and ask why I didn’t get an A?

My father would speak Chinese to his family and my mother didn’t understand a word of what he was saying. My mom would often tell me that it sounded like he was yelling the entire time that he was speaking Chinese, even if he was smiling at the same time. I am sure that the “language barrier” put a strain on their marriage. My dad always wanted to speak Chinese to people who could speak Chinese regardless if that meant my mother was included in the conversation.

This may not be as true to today as it was in the 1940’s but then, but I believe that the my father was raised Chinese culture where women were supposed to defer to their husbands in all family matters. And I believe that was an expectation that my father had for his wife. Unfortunately what he didn’t realize is that my mother’s German/ Irish heritage could get a little feisty when pushed around. The pushing and the push back in their marriage added to a lot of verbal and physical fighting. In the end, it was better for these two people to not be married to each other. The divorce was hell on me as a young child, and to this day I still feel the adverse effects of their decisions in my own life.

But looking on the brighter side, I have also always felt like I was blessed with the best of both worlds: On the one side, I have the blood of 5,000 years of China’s rich exotic history, culture, language, food, and inventions. And on the other side, I was born in the heartland of the United States in Wisconsin as a red blooded American with all of the privileges, rights, and freedoms that come along with this blessing. I am no man and every man, I am the bridge between East and West, and I have a deeper and more understanding perspective of other cultures outside of the United States and I am a better man because of it.

Looking back on my parent’s marriage, I do think that the cultural differences made the already challenging institution of marriage that much more difficult from the start. Yes, multi-cultural marriages can and do work and the benefits to their children to society at large can be enormous.

I myself married an American born Chinese woman and together we have 4 beautiful 3/4 Chinese babies (1/4th German and Irish). For most of my life I never felt settled about what part of my ethnicity I should identify myself with. Then one day my Chinese father-in-law set me straight. He said, “John, your father is Chinese so you have a Chinese last name, and that makes you Chinese.” Simple as that it helped me feel more grounded, however I did modify my heritage description to “red-blooded Chinese American,” that seemed more accurate!