‘The Martian’ Extended Edition on Blu-ray 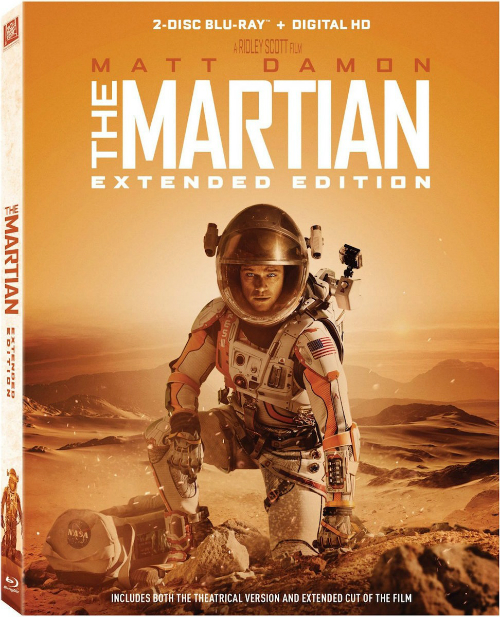 ‘The Martian’ Extended Edition on Blu-ray

When we were very young, going to the moon was a great adventure we watched on TV. Then came the shuttle and the space station and suddenly space was more accessible. Now the world has set its sights on Mars. “The Martian” is a film that takes place well into the future when manned missions to the red planet are being undertaken.

Unlike our missions to the moon, Mars presents more problems for people because of its distance from earth. This is the essence behind the film as Matt Damon was nominated for an Oscar and won a Golden Globe for his performance as astronaut/botanist Mark Watney. “The Martian” is a story of survival and humanity, and for those of us who have been intrigued by space travel through the years, this is a film filled with courage, strength, and intelligence, all embodied by Watney.

In 1995 Tom Hanks brought us the story of “Apollo 13” and the heroic efforts by the astronauts and the support team on earth who all worked to safely bring three stranded astronauts back home. That film was based on a real story. “The Martian” is completely fictional, however it is definitely intriguing because the science behind what unfolds in the film is plausible.

After a super storm hits close to their habitat on Mars, the crew prepares to abandon their mission and come home to earth. When an accident injures Watney, the rest of the crew thinks he is dead. They leave him behind, all the while unaware he has survived.

Watney is injured, but alive. When he regains consciousness the enormity of what is happening hits him. He is all alone on a distant planet. He has no communications with Earth. No one knows he is alone. He doesn’t have enough food to last until the next scheduled mission lands on the planet.

What unfolds is the sheer determination of Watney to survive and for those on earth to find a way to save him and bring him home. Do you have the grit to survive all alone on a distant planet? Could you hold it together to stay sharp and figure out how to stay alive? Watney never gives up. He is extraordinary and highly intelligent with a sense of humor that adds greatly to his lust for life and for viewers’ enjoyment as they watch while the days pass by and everyone is trying to figure out what to do.

This Extended Edition includes an entire second disc filled with bonus features giving viewers an inside look at the making of the film, the science behind the film, the actors, and NASA. There is also a gag reel. Besides the theatrical release, the extended version is also included which has 10 minutes of new footage. “The Martian” is an entertaining movie held together entirely by this 46-year-old actor. Damon deserves many accolades for his performance.